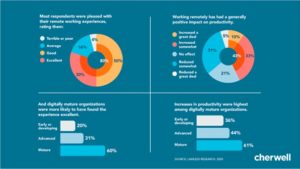 Just a few months ago, the interplay between work, workforce, and workplace was well-established: Workers generally came together as a workforce in the workplace to get their work done. Then they went home. Most systems—IT, management, HR—were set up to function in that paradigm. Remote work arrangements were often short-term or “exceptions” and often discouraged.

And then the catalyst called Covid hit, and—often within hours—workers were sent home to carve out workspaces in their attics and living rooms, where they struggled to remain tethered, to form a workforce, to get the work done.

For some companies, such as Planview, a developer of enterprisewide project and work management software that works closely with process integration software developer Cherwell, remote working was not an entirely new experience—but it has been a good one. Prior to the pandemic, about 60% of Planview’s global workforce already worked remotely. For those forced out of offices by Covid-19, says Sara McManigal, director of organizational development, the early days were focused on making sure the new remote workers had the tools and even furnishings they needed to succeed. For those long accustomed to working remotely, McManigal says, there was actually a sense of relief: the playing field was suddenly leveled; there were no lunchtime conversations to miss out on.

Planview’s experience corresponds with a new survey conducted this past spring by Lawless Research on behalf of Cherwell, which found that remote working has been inordinately successful—not only as a way to keep workers safe but also as a means to benefit their companies. The vast majority of now-remote workers said their experience has been positive, and nearly half reported an increase in their productivity. As McManigal notes, even as Planview came to realize that the remote-working situation wasn’t as temporary as they’d originally assumed, individual productivity across the company remained high, and efforts to make sure that collaboration between remote workers was reinforced helped ensure it stayed that way.

The key to the success? The evidence is in the data. The executives whose companies were further along the road to digital transformation were three times as likely as those in the early or developing stages to report “excellent” remote working experiences. And gains in productivity were more evident the more mature these companies were.

These gains represent an enormous change from the results Lawless reported in a similar study conducted for Cherwell last year in which most workers described systems that weren’t integrated and work that wasn’t automated, all of which created a drag on productivity.

What’s made the difference? It’s a combination, Cherwell CEO Sam Gilliland says, of technology and management. Integrated, automated software, along with the ability to work on a low-code/no-code platform, has made adapting workflows faster and easier. So has “keeping the human element in mind. It’s not just how people get their work done. It’s how we connect with them.”

That approach, notes McManigal, has been critical at Planview. “We’ve had to shift our thinking to make sure employees have space to share wins, challenges, fears,” she says. “We’ve needed to make sure they feel cared for, both personally and professionally.”

It’s no surprise then, adds Kim Osoba, Cherwell’s director of talent and organizational effectiveness, that Cherwell has seen a fivefold increase in RFPs for its digital transformation offerings—many of them for HR service management (HRSM)—since the pandemic began. “HRSM has become a lead step,” she says, “simply because these tools allow us to engage with a workforce that is now everywhere and needing information.”

It’s likely, says Gilliland, that the workforce will continue to be everywhere. While respondents guessed that only 43% of their workforces will remain remote after the pandemic (compared to 61% these past several months), Gilliland notes that the survey was conducted before it became clear that remote working would be necessary—and feasible—for so long. In industries such as technology, he predicts, the percentage working remotely will be closer to 70%, with companies—and employees—reaping benefits that include not only productivity but also cost savings and increased employee and customer satisfaction.

McManigal expects that Planview will see a large percentage of its employees request that they continue to work remotely once the crisis lifts. And to her surprise, given her own HR roots, she counts herself among that group. As she puts it, “If you’d asked me a year ago if I’d consider working remotely, I’d have said you were crazy. But I love it. It’s working.”