9 Ways the Internet Has Changed the Workplace (1/2)

You are here:
Interesting things to know!IT & IS

The Internet and the Workplace in 2019
Before jumping into how the workplace has changed because of the internet, let’s take a look at the current
state of the digital workplace:

As you can see, the internet has the power to transform the workplace and this gives executives and other
business leaders plenty of reasons to adopt more digital solutions in their business. However, it’s also clear that
most companies are behind, meaning that many of you may have not yet fully experienced the way the internet
has changed the workplace, but it’s coming.

1. Think Digitally
The internet has created a whole new workplace that exists entirely in the digital realm. Thanks to the internet, it’s
possible to run a large-scale retail operation without having to rent out a single square foot of office or
warehouse space. It’s also possible to get thousands and thousands of people to flock to your website just
because an Instagram celebrity posted a photo about you and told their followers to check you out. It’s also
possible to automate almost everything and just sit back and watch things run.
These examples show how the internet has radically changed what we actually do in the workplace.
You can work for a company that sells a product you will never see let alone use. Or, your primary responsibility
could be managing email campaigns or driving social media engagement by posting content and contributing
to an online discussion.
For companies, these possibilities give hope, but they also create challenges. Managers need to coordinate
teams spread out across the globe, and they need to make sure employees have all the digital tools they need
to effectively take advantage of all the internet has to offer and also be as productive as possible.

All of this means that success in today’s workplace, whether as an employee or manager, means you need to be
prepared to think digitally. You need to have the necessary digital competence to be able to not only operate in a digital environment but
also excel in it. And you need to be proactively thinking about digital solutions and how to use them to move the
company forward. This approach is all but required in today’s work environment, but this was not the case just 20
years ago, which shows just how much the internet has changed the workplace in such a short period of time.

2. Location
One of the most obvious ways the internet has changed the workplace is that it has gotten rid of the need to
even have a workplace. It’s now easier than ever for employees to work from home, and this seems to be
something they want. Employers are responding by making work from home arrangements easier and more
available.
On the one hand, this change has made life much easier for most people. It allows you to keep doing your job
without having to commute, and it makes it possible for teams to be created with members from across the
world.
This is a huge advantage for companies since they no longer need to limit their search for new team members
based on geography. Instead, they can cast a much wider net and recruit talent from all over the world.
This also presents an opportunity for companies to save money since they only have to worry about paying
salaries that are fair for the area in which the employee lives.
In the workplace, this has brought many changes. For example, for those working in an environment where there
are several people telecommuting, time zones will be an issue. To plan meetings, and to get responses to
messages, you need to be aware of what time it is in the area where your colleague is working. The difference
becomes even more dramatic when there are team members located in other countries. Another thing to consider is cultural differences. When working with people from different cultures, finding ways to
meld the many different perspectives, habits, and ways of doing things can be difficult.
In general, cultural diversity is not a new aspect of our workplaces. But in the past, most people rarely interacted
with their international counterparts. Diversity was more a feature of the company rather than a real part of an
employee’s work experience. Now, thanks to the internet, teams made up of people located all around the
globe are not only much easier to organize but also very common.
Managed correctly, this can provide a huge boost to a company and can make the work environment more
exciting and fulfilling. Improperly managed, it can make it really difficult to get people to engage with the work
they’re doing and be at their productive best.
Here are some stats to help demonstrate how significant this remote work trend is: 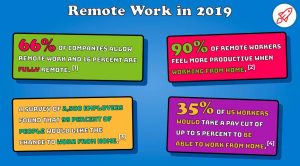 3. Hours
For most of us, working full-time has nearly always meant 40 hours per week. Typically, these 40 hours are worked
from Monday to Friday from 9am to 5pm. In recent years, employers have become more and more flexible when
it comes to the hours, especially in cities where traffic is bad, but normal office hours have stayed basically the
same for most of the last half-century.
The internet has completely changed this. Now that people can work when and where they want, the fixed, 40-
hour working week is really no longer needed. Instead, people are free to choose the hours they want to work
based on what makes the most sense for them.
This has made it much easier for people to build what we now call a work-life balance. You no longer need to
decide between going to see your child’s play and working on your expense reports. Instead, you can go to the
play and then finish and submit the reports later when you’re home.
Of course, there may be times when you need to be online at a specific time for a meeting, but this is much less
prohibitive than having to be in an office every day for eight hours. Up until now, Corporate America has been somewhat slow to adopt this trend. Most companies still rely on some version of the traditional 9-5. But this is changing. There are many companies, especially newer ones, embracing
this concept of flexibility with success. Expect more companies to copy this model moving forward.

Communication is what makes a company tick. A business cannot be successful if its employees don’t have the
means and the motivation to talk with one another and coordinate their efforts. It’s also important for employees
to get to know one another on a more personal basis so that they can build up a rapport that will make for a
more pleasant and enjoyable work environment.
Not surprisingly, the internet has had a profound impact on how we communicate in the workplace.
First, the internet has given us more mediums of communication than we’ve ever had before. If you have a
question for your boss or a coworker, send them an email or an instant message. Still can’t reach them? Tag them
on your project management program, or give them a call using VOIP (voice over internet protocol), which works
like a phone but is cheaper for business’ to install and use.
Beyond this, the internet has also changed how we communicate with one another. Since email and other
messages can be sent and received all through the night, it has made it easier for us to be always “on.” This is
useful when we’re needed to solve a problem, but it can be a big challenge when you’re trying to create
boundaries and set aside time in your schedule for activities not related to work.

Personal Communication
One more thing to keep in mind is how the internet has reduced the amount of time we spend communicating
face-to-face. Because it’s so easy to just send a message on our phones, and because working online often
means we’re far away from our colleagues anyway, it’s often harder to foster personal connections with other
members of your team.
You’ll never be able to completely recreate the environment of an office, but there are things you can do to help
bring people closer together.
Frequent all-hands meetings are helpful, but even just setting up a dedicated channel on your communication
tool (such as Slack) can be great for allowing people to loosen up and share more of themselves with their
colleagues, something that can only be good for team morale and workplace culture.
However, it’s true this is no replacement, and we can consider this another change in the workplace. Office
parties are becoming a thing of the past, and it’s less likely for coworkers to become involved in each other’s
personal lives. Whether this is a good thing or a bad thing is up to you to decide, but it’s certainly a feature of the
workplace moving forward.

5. Collaboration
In addition to communication, the internet has also dramatically changed the way we collaborate while working
on a project, mainly by providing us with many more tools we can use to collaborate.
One of the most widely used of these tools is Google’s suite of productivity programs (Docs and Sheets, mainly).
These, along with other cloud-based productivity tools, allow multiple people to all work on a document at one
time, which makes it infinitely easier to work in teams on larger projects.
No more sending documents back and forth, changing the name each time to make sure the next person knows
they’re working on the most recent version. Instead, the document is saved as it’s updated, and this is a huge
time-saver. There are also quite a few project management tools out there, such as Trello, Asana, and Teamwork, which
make it remarkably simple to distribute the workload of a project, track tasks, and expenditures, and
communicate with team members about the project.
All of this means we can be more productive and efficient when working on projects in teams, and we have the
internet to thank for that.